Most Drivers Think Texting and Driving is Safe 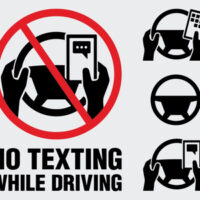 Despite common sense, most drivers believe that they can safely text and drive at the same time, a recent study found. The truth is that drivers who text behind the wheel are 610 percent more likely to crash than those who do not. Texting and driving causes extreme distraction in three ways: physically by taking one or two hands off the steering wheel; cognitively by taking the driver’s focus away from driving; and visually, but taking the driver’s eyes off the road.

Why Do People Do It?

Deep down, drivers must know that texting increases the likelihood of crashing, right? Logic would dictate that, yet why do so many drivers text despite this rationality? According to research, drivers who text, and therefore put their own self-importance above other road users, do it because of fear of missing out and separation anxiety.

Phone Use in General Causes Crashes

Texting and driving is dangerous, but so is talking on a handheld phone, using GPS, and talking on a hands free device. Any type of electronic use causes distraction, and yet most Americans use their phone for some function every time they drive. According to Zen Drive, 60 percent of drivers use their phones while driving at least once every time they get behind the wheel. The company found that phone use while driving is 100 times worse than previously estimated.

Teenagers Are Not The Problem

While teen texting and driving is certainly rampant, and countless government and local programs are aimed at combating this dangerous epidemic, adults are the real problem when it comes to texting. Adults are actually more likely to text behind the wheel than teens, according to research and The Washington Post. Adults may believe that, because of their experience driving, they can get away with “safely” texting while going straight on the highway or at red lights, but the fact is that texting is dangerous at all times, even while stopped. For example, if a driver is texting at a red light, and they see that traffic is beginning to move out of the corner of their eye, they generally take their foot off the brake and begin accelerating a split second before they look up from their phone. If there is a pedestrian crossing the street in front of them, or if the lane to the left was the left turn lane and the texting driver is going straight and still has a red light, their obsession with their phone will spell disaster.

If a texting driver caused your serious injuries, an attorney can hold them responsible. Not only will we help you achieve some semblance of justice, but we can ensure that your medical bills, lost wages, pain and suffering, disability, property damage, and other damages are compensated for. Call the Payer Law today at 866-930-1238 to schedule a free consultation with an Orlando car accident attorney.