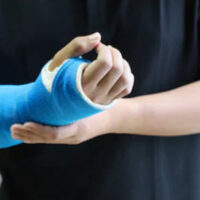 In our society, a careless driver, business owner, or dog owner, for example, that causes an injury to another person can be held fully accountable for the injuries they cause, even if the injured party had a pre-existing condition that made them more susceptible to harm than a regular person. For example, you were knocked over by an overeager puppy that jumped up on you to say hello. The dog was leashed by its owner and not malicious, but it still caused harm when you were knocked to the ground because you have brittle bone disease, a condition that predisposes you to serious fractures that would not cause harm to a person with normal bones. In this scenario, the dog owner would be liable for your medical expenses, pain and suffering, lost wages, and other damages under the eggshell skull rule.

Where Does the Eggshell Rule Get its Name?

Imagine that your child, who is playing basketball in your driveway, shoots a ball and it bounces off into your neighbor’s yard, fracturing your elderly neighbor’s thin skull. Under normal circumstances, such an accident would not cause any real harm, but because of your neighbor’s “eggshell-like skull” condition, it sends them to the hospital. The eggshell skull rule or the “thin skull rule” is a legal doctrine that imposes liability on a defendant even when the plaintiff has an “unforeseeable and uncommon reaction” to the defendant’s negligent or intentional tort. It does not just apply to “thin skulls” or brittle bones, however.

Conditions That Cause a Predisposition to Serious Injury

There is no specific list of medical conditions that fall under the eggshell skull rule. Any ailment that can result in an extra serious injury for a victim is valid. Below are a few examples.

As described above, a pre-existing injury does not exclude another party’s liability for causing injury. For example, a pedestrian could have a fractured neck that is mostly healed and be hit by car at slow speed, causing the neck to be re-broken and the spinal cord severed. The driver cannot use the argument that their low speed collision would not have caused the spinal injury if not for the pre-existing injury. It does not matter that the victim had a pre-existing injury; the driver will still be liable for the medical expenses, lost wages, lost joy of life, and pain and suffering caused by the spinal cord injury.

Whether you were injured in a traffic collision, in a slip and fall, or in some other accident, you need an experienced Orlando personal injury attorney to take on your case in order to be properly compensated. Call the Payer Law today at 407-307-2979 to schedule a free consultation.