Walking at Night is Not Against the Law 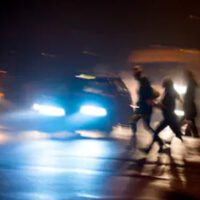 If you were hit by a car while walking at night, you need to talk to an attorney immediately. Do not let the other party or the police tell you that you were at fault because you were wearing dark clothing or were crossing the street at an unlit or dimly lit intersection. Pedestrians are not required to wear lights, wear bright clothing, or stay off the streets and sidewalks once the sun goes down, and you have the right to file a personal injury claim against the negligent driver who hit you.

76 percent of pedestrian fatalities occur at night, according to the National Safety Council. The obvious reason for this occurrence is that drivers lack visibility at night compared to the day time. However, this is not the only reason. Drivers at night are more likely to be intoxicated than drivers during the day time. According to the National Safety Council, impaired drivers are most likely to be out on the roads between the hours of midnight and three in the morning. As a pedestrian, you should not be convinced by law enforcement or the other party’s insurance company that it was an unsafe time to be out walking and that you “should have known better,” or other tidbits of un-asked-for wisdom along those lines.

Homeless People Are Hit Every Night

The Orlando Pedestrian Injury Attorneys at The Payer Law Can Help

Pedestrians hit at night deserve financial compensation for their damages, period. No matter the circumstances of your incident, the Orlando pedestrian accident lawyers at the Payer Law can help. Call us at 407-307-2979 to schedule a free consultation today.