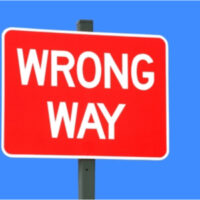 Florida has a catchy saying, “Stay Right at Night” that is meant to prevent crashes with wrong way drivers. Wrong way crashes are more likely to occur at night, dusk, or dawn and staying to the right could allow a driver to avoid being hit by a car that swerves from their lane of traffic over the center yellow lines. While wrong way driving is not a frequent problem on the roads, the outcome of a wrong way crash is often tragic.

How Do Drivers End Up Going The Wrong Way?

Why Wrong Way Collisions Are So Dangerous

According to the Florida Department of Highway Safety and Motor Vehicles, 81 percent of all wrong way crash fatalities are caused by head-on collisions. Head-on collisions are incredibly dangerous because both cars are going in opposite directions at the time of the impact, so the force of the crash is equivalent to both cars’ combined speeds. Those who survive such crashes are likely to experience whiplash, head trauma, broken bones, lacerations, internal bleeding, or other medical emergencies.

Wrong way collisions often result in severe injuries if not wrongful death. If you or a loved one has been hit by a driver going the wrong way, seeking compensation will help you financially recover from the trauma. An Orlando car accident attorney can help you begin the legal process and collect all of the documentation needed to file a personal injury claim. Call 407-307-2979 to a free consultation with a skilled attorney at Payer Law today.