What is Comparative Fault and How Does it Impact Florida Auto Accident Claims? 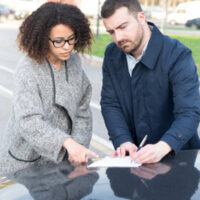 The main principle of personal injury law in the United States is that whoever is negligent and causes an accident should be responsible for paying the other party’s damages, like medical bills and property damage. However, this is not entirely black and white. What if there are multiple people who were negligent? What if the at-fault party also had a vehicle defect that contributed to the accident?

Florida, along with many other states, follow comparative negligence. This means that if multiple parties share responsibility for the accident, then each party shares a percentage of fault. If someone is 95% at fault, the injured party can collect 95% of their damages. Essentially, your damages are reduced by the percentage of fault you were responsible for.

However, this is where the important distinction between modified and pure comparative matters. With pure comparative negligence, you can collect for a portion of your damages even if it’s only one percent. In a pure comparative state, the driver who was 95% at fault can still collect 5% of his or her damages against you.

Some states felt pure comparative was unfair and adopted a new version modified comparative. With modified comparative negligence, the victim must be less than 50% negligent in order to recover his or her damages. This means that someone who is 49% at fault for the accident can collect, but the person who is 51% at fault is barred as though he or she was in a contributory negligence state.

Determining liability in a Florida car accident is much harder than saying one party is at fault and therefore liable for the victim’s damages. Having an Orlando auto accident attorney on your side is important. Contact Payer Law today to schedule an initial consultation. Let us help you get the compensation you deserve after a Florida auto accident that was caused by someone else’s negligence.