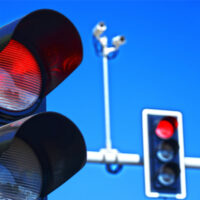 There are around 70 million surveillance cameras in the United States—about one for every 4.6 American citizens, slightly more cameras per citizen than China according to CBS News. While there are certainly many downsides to what some are referring to as a police state or “Big Brother,” sometimes these and other video sources can be used for good—to prove negligence in a car crash or to find a suspect in a hit and run collision. However, obtaining video footage is easier said than done. Even if you suspect that your collision was caught on camera, you still have a long way to go in obtaining the footage and proving negligence.

Traffic and Red Light Cameras—Traffic cameras and red light cameras are frequently used in Orlando, but obtaining footage for your case may be difficult. Your chances are always greatly improved if you are working with an attorney, who can issue a subpoena if the state, city, federal, or private  agency does not respond to, or turns down, your initial requests.

Private Business Surveillance Camera—Another avenue worth pursuing is footage from a private business. Business owners may be more likely to help than a government agency or traffic surveillance company, though a subpoena can be issued if necessary.

Parking Lot Collisions Caught on Camera—Parking lot cameras are generally used to deter crime. In fact, following lawsuits and backlash for negligent security, Walmart now has “Lot Cops” (video and audio surveillance placed high on poles) in hundreds of its stores across the country, according to KY3 News. Many collisions occur in parking lots, particularly pedestrian injuries, can make use of parking lot surveillance cameras.

Bike Cameras—More and more cyclists and motorcyclists are riding with GoPros and other helmet and handlebar-mounted cameras in order to catch cool footage, as well as capture license plate numbers and the reckless and harassing behavior of motorists. This personal footage can go a long way in determining fault. Cyclists without their own cameras can also use Strava, a running and riding social media platform, to track down those involved in hit and runs; by using Strava, a victim can find out what other cyclists were on the road at roughly the same time, and who may have been capturing video at the time, and hopefully the license plate and/or make and model of the car involved in the hit and run.

Dash Cams and Eyewitness Phone Footage—Dashboard cameras and video footage from phones can also make or break a personal injury case. However, as with any video footage, a dash cam may not show the whole story. An attorney can help you decide if the footage you have obtained or shot yourself will help your personal injury claim.

An Orlando Personal Injury Lawyer Can Look at Your Case Today

Whether you or a loved one were recently involved in a collision, an experienced Orlando personal injury attorney can help you recover maximum financial compensation with or without video footage of the incident. For help scheduling a free consultation today, call Payer Law at 866-930-1238.