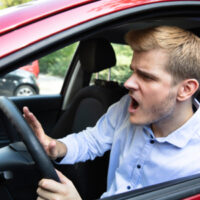 It is easy to spot an aggressive and careless driver on the road but sometimes when traffic is heavy or the roads are narrow, it is more difficult to avoid them before they cause a crash. Florida Statute 316.1923 defines careless aggressive driving as committing two of the following actions either simultaneously or within close succession to each other.

Speeding – Any motorist who is traveling 15 mph over the posted speed limit is subject to four points on their license and is exhibiting one of the signs of aggressive careless driving.

Unsafely or Improperly Changing Lanes – Turns signals should be used anytime a motorist wants to turn or change lanes. According to Florida Statute 316.155, a motorist should signal for at least 100 feet prior to moving out of their lane. A driver should not speed up or slow down to change lanes until after they begin signaling. Before changing lanes a driver should look to ensure there is not any traffic coming up on them.

Following Another Vehicle Too Closely – Also known as tailgating, when a driver follows another vehicle too closely they lose reaction time and are more likely to cause a collision. The general guideline for tailgating is that if you are a driver following another vehicle, you should give yourself at least two seconds reaction time. This looks like about a car-length for each 10 mph, so three car-lengths back is appropriate for two vehicles traveling 30 mph.

Failing to Yield the Right-of-Way – Drivers must yield to the right-of-way given by traffic signals and signs. It is also Florida law that a driver must yield to a public transit bus signaling to reenter the lane of moving traffic and to construction workers such as flaggers.

Improperly Passing – Most drivers know that they must pass on the left side of a slower vehicle unless there is an exception as laid out in Florida Statute 316.084, such as a left-turning vehicle. When passing cyclists and non-motorized vehicles, drivers must give the vulnerable road user at least three feet of clearance. A driver who crosses the double yellow lines into oncoming traffic to pass instead of waiting for a passing lane or dotted line is executing improper passing.

Violating Traffic Control and Signals – An aggressive careless driver is likely to ignore street signs and traffic signals that slow them down. They may run a red-light, fail to stop at a stop sign, or blow through a yield even though there is oncoming traffic.

If You Have Been Hit By An Aggressive Careless Driver, Contact an Orlando Personal Injury Attorney

The behaviors of aggressive careless driving have no place on the roadways because they often lead to crashes and injuries. If you have been injured in a collision caused by an aggressive careless driver, you deserve to be compensated for the pain and burden. They should be held liable for their actions, because had they driven responsibly, the crash wouldn’t have occurred. Call the experienced Orlando car accident attorneys at Payer Law  at 407-307-2979 for a free case evaluation today.