Semi-Truck Drivers Are Out Of Control In Florida 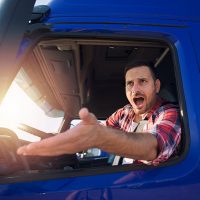 Imagine driving on the highway when suddenly the car in front of you slows down without warning. You slam on the brakes and glance in your mirror in fear of being rear-ended. The last vehicle you want to see behind you is a semi-truck. Not only do these heavy vehicles have much longer braking distances than passenger vehicles, but they’re also capable of causing much greater levels of destruction and injury. Unfortunately, many semi-truck drivers are also extremely reckless, and many accidents involving these vehicles occur each week in Florida.

If you have been injured by a semi-truck in Florida, it makes sense to get in touch with a qualified, experienced personal injury attorney as soon as possible. These legal professionals can help you fight for your rights in an effective, confident manner – ensuring you receive a fair, adequate settlement for your damages. This settlement can help you pay for your medical expenses, your missed wages, and much more. Due to the statute of limitations, it is imperative that you book your consultation with an attorney as soon as possible.

On May 27th, it was reported that a trucker had driven straight off the I-74 overpass in Lee County (1). The vehicle then ended up hanging off the side of the overpass before bursting into flames. Amazingly, no one was seriously injured, and the trucker escaped with minor ailments. Police still don’t know exactly what caused the trucker to lose control, but one thing is clear:

This could have been much worse.

Trucker Admits to Smoking Meth Behind the Wheel

Also on May 27th, it was reported that a trucker had crashed into the back of a grocery store in Florida. After responding to the scene, police officers asked the trucker about the incident. The trucker then acted strangely, and he initially refused to exit the cab. Finally, the police officer managed to get him out of the vehicle. At this point, the trucker admitted he was smoking his meth pipe at the time of the accident. Again, it was a miracle no one was seriously hurt.

If you’ve been searching for an Orlando personal injury attorney, look no further than Payer Law. Over the years, we have helped numerous plaintiffs  in the Sunshine State, including those who have been injured in serious car accidents. We know that semi-trucks are capable of causing devastating, life-changing injuries, and we’re here to help you fight for your rights. Book your consultation today and strive for a fair, adequate settlement right away.