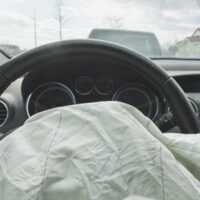 Vehicles have become much safer since the 1970 and 1980s, when seat belt use was low and airbags had yet to be installed in cars and trucks. According to the National Highway Traffic Safety Administration (NHTSA) in recent years, there have been roughly 40,000 traffic fatalities per year. In 1973, there were over 54,000 traffic fatalities, despite the fact that the U.S. population was just two thirds of what it is today, according to the Census. Moreover, the average person drove fewer miles, and at much lower speeds, than the average American of today. A few of the technological advancements that have made cars, trucks, vans, and SUVs so much safer for occupants include the following:

Recently, technology advancements have been focused around preventing crashes caused by distracted driving, while in the past safety features were designed to prevent injury during a crash. Regardless, any one of these safety features can fail when they are needed the most, resulting in serious injury for the occupants of the vehicle.

While it may be obvious that the crash you were involved in was caused by the other driver’s maneuvers, or your own distraction or speeding, it is important to also investigate the specific cause of your injuries if or your attorney suspect that a safety feature of your car was to blame or contributed to your injuries. Defective airbags have seriously injured hundreds of Americans in recent years, sometimes shooting metal shrapnel into the faces of unsuspecting crash victims. Brakes can malfunction even when they were properly tuned by a mechanic, while advanced safety systems can go haywire. Whatever the defective product may be, you have the right to file a personal injury claim against the manufacturer, in addition to any personal injury claim you may end up filling against the other driver if they end up being found liable. While most Florida drivers are either uninsured or underinsured, meaning that you may not end up with enough compensation to pay for your medical bills and lost wages, the car or parts manufacturer responsible for your injuries certainly has the funds to pay for your full damages. By working with an attorney, you can be compensated for all of your damages, including pain and suffering, disfigurement, loss of joy of life, and more.

Were you injured in a serious collision that was caused by your own vehicle’s defection? Or was your collision a combination of human error and defective product? You need to talk to an Orlando auto collision and product liability attorney about your options for compensation. To speak with a highly qualified Orlando personal injury attorney at no cost, call Payer Law today at 407-307-2979 to schedule a free consultation.