Rear-Ended in Florida? Three Times You Might be Blamed 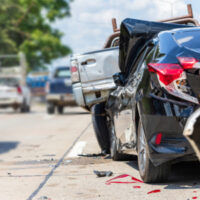 One of the most common types of car accidents that can occur is due to being rear-ended, otherwise known as a “fender bender.” These accidents can be the result of any number of factors, but they are one of the most common types in the Sunshine State. Because Florida is a “no-fault” state, meaning that whenever there is an accident, the insurance companies of each party pay for their own vehicle damages and injuries respectively. However, there are times when a driver may be found at fault for a “fender bender.” Here is some information about when this law does and does not apply.

Oftentimes, when one driver rear-ends another, the driver who struck the other is considered liable. However, there are a few times when this liability doesn’t matter. What might frequently present itself here in Florida, which is called a “no-fault” state, is that there can be some ambiguity about who may be responsible for the accident.

What is a no-fault state and what does it mean for Florida drivers? This means that each person in the accident pays for their own damages through their own insurance companies, thus making the discussion about liability moot. However, since the state of Florida waves liability, every driver must be able to show PIP before they take anything with 4 wheels on the road. PIP specifically covers a majority of the personal injuries that can occur as a result of an accident, up to a certain amount.

PIP often works with PDL, or personal damage liability, which might cover any excessive damages to another person’s property. The only time that “no-fault” might not come into play is if a person is rear-ended in such a way that they sustained a life-altering injury from the crash, such as a permanent neck injury or a traumatic brain injury (TBI).

Other Times Where The Front Driver is At Fault

Another common way you might be found at fault is if your rear lights were out, so that the driver was unable to notice you stopped so that they could stop themselves. Lastly, another common way you may be found at fault is if there is a multi-car collision. If the first vehicle strikes one car, which then strikes the other, that first car is held liable.

Were You Rear-Ended in Orlando?

If you were in a car accident, even a small one where you were rear-ended, it is important to contact a trusted Orlando car accident lawyer right away. Even in states where it is unlikely you will be held at fault, it is important to have us here at Payer Law protect you from anyone claiming that you were at fault for the accident. Furthermore, if you were injured, we can help you get the financial restitution you deserve following your accident. If you were in such an accident and you would like to schedule a free, no-risk case evaluation with us, please feel free to contact us today.