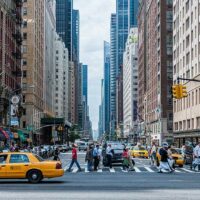 Even though pedestrian accidents have been on the decline for the past 40 years, evidence suggests that they are once again on the rise, which is something the Orlando personal injury attorney wants to help avoid. In 2013, fourteen percent of accident-related deaths were pedestrians. Since a majority of walking occurs in urban areas, about 70 percent of pedestrian deaths occurred in urban areas in the United States. Some of the contributing factors to pedestrian deaths were the age of the pedestrian as well as the speed of the car at the time of impact. Death was more common if a pedestrian was older and if the vehicle was speeding at the time of the crash. Luckily, for Florida, the Orlando personal injury attorney, Payer Law, can help clients receive what they deserve when they’re involved in a personal injury accident.

Why Can’t We Eliminate Pedestrian Accidents?

There is no clear explanation for why these accidents keep happening. We’re not sure if it’s because more people are relying on walking to get to and from places or if it’s because there are more distracted drivers on the road. Regardless of the reasoning, the accidents are still occurring even with the precautions that the government has put into place as well as the awareness that individuals are trying to bring to the topic. The truth remains that the accidents are still occurring at the same rate and people are still dying.

What Are The Contributing Factors?

At this point, you have to be asking yourself how can we avoid these accidents? What are some of the things that play a role in them occurring? Just like we mentioned before seventy-three percent of these fatal accidents occur in urban areas and cities. Any area where people are walking around more often than not there is going to be a higher risk. Pedestrians need to make sure they are more alert and cautious. Another contributing factor is the time of day. Nighttime is the most common time for these injuries to occur, more specifically between six and nine pm,  because of the reduced vision drivers have as well as people rushing home after a long day at work. Making sure you are dressed appropriately as a pedestrian (bright clothing, flashlight) will reduce the risk of an accident. During the weekend the hours that see a peak in pedestrian injuries shifts to between nine pm and midnight. These days and times also have an increased risk due to the likelihood that alcohol is involved. It’s easy to talk to pedestrians and tell them that they need to be more alert and cautious, but the truth is that distracted driving is a significant factor in these injuries and deaths. The best advice that can be given to both pedestrians and drivers is to be aware of your surrounding and make sure you are focused at all times.

Payer Law, the Orlando Personal Injury Attorney, is here to help with all personal injury cases in the Orlando area. We ensure that each one of our clients receives the attention and results they deserve after suffering from pedestrian accidents. Call or visit us today to have a free consultation with one of our lawyers.