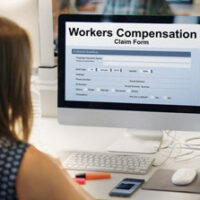 America has turned its back on what makes this country great—immigrants. Immigrants, whether they are naturalized citizens or undocumented, should be awarded the basic human rights to come to this country, work, seek education, and live in peace with their families. Undocumented immigrants who have fled violence, poverty, and the crisis of climate change should be granted the basic human right to start new lives in the United States, no matter what. Human rights are defined by the United Nations as “the right to life and liberty, freedom from slavery and torture, freedom of opinion and expression, the right to work and education, and many more.” Unfortunately, these human rights come with an asterisk. Only documented and immigrants with U.S. citizenship are granted these human rights. Undocumented workers can be imprisoned and thrown out of the country at any time—something that corrupt employers, lawmakers, and insurance companies have been taking advantage of here in Florida for years.

ProPublica and NPR uncovered hundreds of cases where the injured undocumented worker never even filed a claim themselves, and were still arrested and deported by ICE for seeking medical treatment. In these cases, the insurance company filed paperwork using the employee’s Social Security number that was used at hiring. These employees were arrested and deported because it is unlawful to use a false Social Security number to get a job.

If You Were Injured, an Attorney Can Help Whether You are Documented or Undocumented

Unfortunately, legislation to eradicate this unfair law (CS/SB 1568) failed to become law. Yet, if you were injured as an undocumented worker, there is still hope. Do not let an unethical employer or insurer scare you out of getting the medical treatment that you need. Florida’s workers’ compensation laws still apply to you as an undocumented worker, and an experienced Orlando workers’ compensation attorney can help you receive the treatment you need.

Whether you are an undocumented worker, naturalized citizen, or immigrant with a valid work visa, you have the right to workers’ compensation. The experienced Orlando workers’ compensation lawyers here at the Payer Law can help you receive the lost wage benefits and medical care that you need and deserve. Call us at 407-307-2979 to schedule a free consultation today.