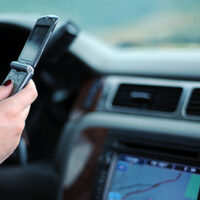 Distracted driving involves any activity that diverts your attention from the road. According to the National Highway Transportation Safety Administration, 3,477 people died in distracted driving crashes in 2015. About 391,000 others were injured. When a person is texting while driving, he or she is 23 times more likely to be involved in a crash. As every Orlando Car Accident lawyer knows, texting while driving can lead to lifelong regret.

92 percent of the states have banned it

It’s safe to say that texting while driving is the most dangerous form of distracted driving. It’s so dangerous that 46 states and the District of Columbia have legislated against it. Like many other traffic laws, drivers continue to ignore it. Florida’s law has no teeth either. Texting while driving is classified as a secondary offense. A police officer must have another reason to pull a driver over who is texting and driving until the texting driver can be cited accordingly.

Sensory deprivation at the wheel

An Orlando car accident lawyer from the Payer Law will tell you that driving a motor vehicle involves the use of three major senses. Those involve:

All three of those senses are abandoned when they’re used for texting while driving. According to the Virginia Tech Traffic Institute, sending or reading a five second text at 55 mph is the equivalent of driving the length of a football field blindfolded.

If you were injured by a careless and negligent driver who was texting while driving anywhere in Florida, an Orlando car accident lawyer from our law firm can prove your case any number of ways. Those include:

For obvious reasons, texting while driving accidents often result in rear-end collisions at medium to high speeds. They might also involve side impacts from abruptly changing lanes to avoid rear-end collisions or failing to yield the right-of-way at intersections controlled by traffic lights or stop signs.

What is so impotant about the text?

Judges see the tragedies caused by texting while driving in their courtrooms time and time again. Jurors see other drivers texting while driving, and they wonder what could possibly be so important that other responsible drivers have to be placed in such danger. A judge and a jury is a bad combination for an insurance company to be on the other side of under those circumstances.

Texting while driving is utterly irresponsible. Even if doing so is obvious, drivers and their insurers might dispute the actual cause of an accident. Never give an opposing insurance company a statement of any kind. Contact a knowledgeable, experienced and aggressive Orlando car accident lawyer from the Payer Law first after any distracted driving case for a free consultation and case evaluation. We don’t even charge any legal fees unless we obtain a settlement or verdict for you.