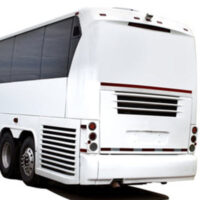 As a victim of an Orlando bus crash, you are entitled to compensation whether you were a pedestrian, passenger on the bus, or a driver. Due to their size, bus collisions often cause traumatic injuries to non-occupants, while even passengers suffer injuries when buses collide with vehicles or fixed objects such as telephone poles or street lights. If you suffered any type of injury, an Orlando personal injury lawyer can help you maximize your compensation.

Vehicle Collision With a Bus

The number of fatal collisions involving buses and large trucks has been steadily increasing over the last decade, up 40 percent from 2009 according to the Federal Motor Carrier Safety Association (FMCSA). Most of those fatalities, and injuries, are caused to non-occupants of buses and trucks, as the size of city, school, and charter buses is an extreme hazard for all other road users. As an injured driver or occupant of a passenger vehicle, you understand this all too well. It is important to work with an attorney to determine the cause of the crash, and to ensure that you are not found liable in contributing to the cause of the crash.

Injured as a Passenger of a Bus

There are a variety of ways in which passengers can be injured in buses, the most obvious being when the bus is involved in a collision. Buses rely on their size when it comes to protecting passengers, and because there are no seatbelts or airbags, passengers may get thrown from their seats, or flung into the metal seat bar in front of them. However, other injuries may occur in the following scenarios:

Serious injuries and death are most likely to occur to pedestrians, cyclists, motorcyclists, and other vulnerable road users who are not inside vehicles. Of the 274 deaths caused in bus collisions in 2017, only 44 were bus occupant deaths; many were pedestrians and cyclists, who share the same spaces of the road as buses, according to Trends Table 22 of the FMCSA. Cyclists are forced to share the shoulder of roads and bike lanes, which buses come in and out of constantly. Pedestrians are at risk when they cross the street, wait at bus stops for approaching buses, and even when they get on and off the bus itself.

An Orlando Bus Accident Lawyer Can Help You Today

The only upside to being involved in a bus accident is that the insurance policy of the bus company or the municipality is likely very large. As such, the total compensation you receive may be much greater than if you were hit by a passenger vehicle. To ensure maximum compensation, you need to work with an experienced Orlando auto accident attorney. Call the Payer Law today at 407-307-2979 to schedule a free consultation.