New Safety Features in Cars for 2020 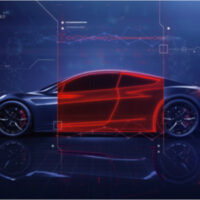 Cars have come a long way with providing safety features for drivers and their passengers. The first seat belts were in all new passenger cars beginning in 1964, although the integrated shoulder and lap seat belts did not come until 1974. Of course, safety features are only effective for the people who chose to use them. According to the Centers for Disease Control and Prevention, only 88 percent of people used seat belts in the 30 states with stricter laws in 2009. States with weaker regulations and enforcement saw even less compliance with wearing a seat belt. Now, cars are equipped with more advanced safety technologies, many which do not even require the driver or passengers to take any action such as buckling up. Here are some new features in cars for 2020:

Automatic Emergency Braking (AEB) – With this feature, brakes are automatically applied when the car senses there may be a potential collision with something in front of it. There are specific versions of AEB that work at city speeds and others that function at highways speeds. There is even a rear AEB, which can minimize the impact of a collision when a driver is going in reverse.

Pedestrian Detection – These detection systems work thanks to stereoscopic cameras mounted behind the rearview mirror along with radar. Some systems simply warn that a pedestrian is in your path, others will brake when a pedestrian is detected.

Surround View Camera System – ExtremeTech points out that Infiniti and Nissan pioneered this technology back in 2007, but it is just now becoming a regular feature you can find on cars. Surround view camera systems are actually a compilation of four images from all sides of the car that can be displayed on the navigation system.

Lane Departure Warnings and Lane-Centering Assist – Crashes can occur when people change lanes without properly looking, which is why some cars now come with warnings to detect when there is a vehicle approaching on one side. Other technology takes this idea a step further and assists the driving in steering within the lane.

Other Smaller Safety Features in Cars

There are plenty of other safety features in cars such as rear seat belt lights to alert the driver or a passenger who is not buckled up or Toyota’s remote control app, which allows parents to receive speed notifications, curfew violations, and more.

Safety features in cars do not take away a driver’s responsibility to pay attention to the road and those who they share it with. Furthermore, many safety features can reduce the severity of a crash, but cannot prevent one. If you have been injured because another driver was being inattentive, aggressive, or careless, you need to seek legal counsel. The experienced Orlando auto accident attorneys at Payer Law will advocate on your behalf and assist you in getting the compensation you deserve for your suffering. Contact us at 407-307-2979 to schedule a free consultation today.