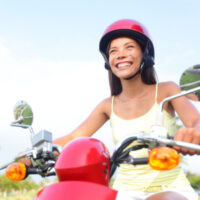 Mopeds (also known as motor scooters) have become a popular method of transportation here in Florida, where moped use is increasing at one of the fastest rates in the nation according to The Motor Scooter Report. There are few other modes of transportation that are as economical, efficient, and fun as riding a moped. However, due to distracted and impatient drivers, riding a moped can be dangerous and result in substantial personal injury.

Some drivers and insurance companies may try to claim that you were unlawfully operating a vehicle on a road or highway. This can present a problem in a personal injury claim if the vehicle is not registered or titled, or if you were driving without a license, or operating a moped or scooter that was not large enough to be classified as a moped under Florida statute 320.01(27). Under that statute, a moped is defined as a vehicle that:

Difference Between a Moped and Motorcycle

An Orlando Personal Injury Attorney Is Here to Help

If you were injured by a negligent driver while riding your moped, scooter, or motorcycle, an Orlando personal injury attorney can help. To receive fair and full compensation, call the Payer Law today at 407-307-2979 to schedule a free consultation.