Is the Driver Always at Fault for Hitting a Pedestrian in Florida? 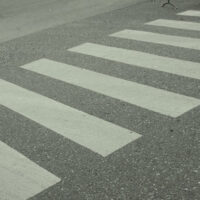 State laws require drivers to act with a heightened sense of caution with regard to foot traffic. However, statutes also specify that pedestrians are expected to obey the rules of public roadways. So, who is at fault for hitting a pedestrian in Florida?

A good attorney always says that it depends on the accident. In general, civil liability rests on the shoulders of the negligent party. Negligence can occur on both sides as well. Speaking with a Florida pedestrian accident attorney is the most efficient way to determine if you or the other people involved were at fault.

How Fault Is Determined in a Pedestrian Car Accident

Determining the guilty part of a pedestrian auto accident isn’t always cut-and-dry in Florida. In order to understand how fault is assigned, you must first understand the legal underpinnings of the process. Florida assigns fault based upon a percentage of each person’s negligent actions.

What Is Pure Comparative Negligence?

Pure comparative negligence is a concept used by judges and personal injury lawyers to describe the degree of fault contributed by both parties. You prove negligence against the other person by meeting three conditions. He or she must have:

In many cases, these three conditions were met by both parties. Assigning fault is more complex than a matter of right versus wrong.

For example, if a pedestrian was struck by a car in a crosswalk when the ‘Walk’ sign was off, should the driver be held 100 percent at fault? While judges and juries ultimately make that decision, the driver could argue that partial fault should be assigned to the pedestrian since it was unlawful to cross at that time.

Why Does the Percentage of Comparative Negligence Matter?

The degree of fault matters because civil court jurors use it to determine who pays how much to whom. For injured people, these numbers can become dizzying fast. In a pedestrian car accident lawsuit, you can file a claim for:

When negligence is shared between the two parties, the stakes are even higher. This is the case for accidents involving counterclaims alleging injury. In other words, be prepared to defend and prove every point of your case. Not being able to do so carries the possibility of assuming more negligence than necessary.

You only have one shot at a lawsuit. While you are not legally required to hire counsel, you also don’t have to leave your future in the hands of uncertainty. The Orlando pedestrian accident lawyers at Payer Law are here to help. Schedule a free consultation by calling local at 407-307-2979 or toll-free at 866-930-1238.