How To Prove That The Other Driver Was Speeding 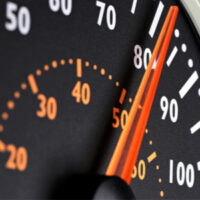 If you were injured in an Orlando traffic collision and you are sure that the other driver caused the crash, in part, because of their speeding, an experienced Orlando personal injury lawyer can help prove that the other party’s negligent driving resulted in your injuries. Just like a crime scene, there is valuable information left at every crash scene. Police and private investigators will take and analyze photos, talk to witnesses, talk to each driver if they have remained at the scene and are not at the hospital, talk to witnesses and drivers in the days or weeks following the crash, and conduct a thorough investigation using the physical evidence left at the crash site.

Speeding is involved in over one-third of all fatal traffic collisions, according to the National Highway Traffic Safety Administration. As such, it is one of the most common elements to negligence in personal injury claims.

Crash scene footage is becoming more common. Dashboard cameras or “dash cams” are . Other forms of crash scene footage include cell phone footage, traffic cameras, and building-mounted video surveillance cameras. Newer vehicles are being equipped with interior and exterior cameras—some cars have 360 degree camera views and dozens of cameras surrounding the vehicle, according to USA Today. GPS within a vehicle can also be used to assess that vehicle’s speed at the time of the crash.

Accident reports or police reports use a combination of witness testimony, crash scene evidence, traffic cameras, driver testimony, and other physical evidence to accurately assess how fast each vehicle was going before the crash. In most cases, you can rely on an official accident report to be accurate when it comes to the speed of each vehicle, who failed to yield right of way, and what party should be negligent. If the other party is given a moving violation, such as careless driving resulting in serious bodily injury, that citation can be used to prove that party’s negligence when it comes time to file a personal injury claim and negotiate with the other party’s insurance company. However, insurance companies are certain to deflect liability even when their client is clearly at fault as revealed in an accident report by the police. While an accident report is valuable, it will not necessarily determine the outcome of your claim. Furthermore, if the police report is flawed or if fault is undetermined, an experienced personal injury attorney can help prove what happened by continuing the investigation and using crash scene reconstructionists and expert witnesses.

The at-fault driver put your life at risk because he or she was being impatient, was late for work, or was simply driving aggressively with road rage. No matter the reason, they broke the law by speeding, and must be held accountable for the injuries they caused to you. Call our Orlando personal injury attorneys today at Payer Law at 866-930-1238 to schedule a free consultation.