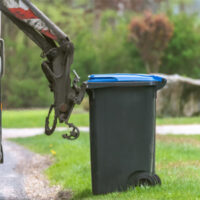 Garbage trucks are a necessity to our way of life, which involves consuming and throwing away 1,704 pounds of trash every year, three times the global average, according to Globalcitizen.org. While usually slow and cautious, garbage truck drivers are often on a time crunch, and the size of their vehicles makes them difficult to maneuver and slow to stop. This results in catastrophic injuries for other road users, particularly children, pedestrians, and cyclists, who are forced to share residential streets with these monstrously large waste management vehicles. A cyclist was recently killed by a garbage truck driver in Tampa, according to the Tampa Bay Times. The cyclist was crossing the street when the dump truck made a left turn and ran the man over, killing him. Another victim was seriously injured in Lauderhill, according to the Sun Sentinel, in a collision so violent that the victim’s car was “turned into a convertible,” according to police.

Why Garbage Truck Collisions Are so Common

Garbage trucks weigh in at an unfathomable 51,000 pounds, according to Waste 360, and they often exceed the legal weight limit of around nine tons well before they are full. This weight makes garbage trucks very slow to stop. Another problem is that, in order to get through their routes on time, garbage truck drivers often ‘gun it’ from one stop to the next. While getting up to 20 miles an hour in 100 feet before having to slow down again to pick up another load does not seem all that fast, the truck becomes a lethal weapon during these fast accelerations. Garbage trucks are also notoriously loud, which makes it impossible for the driver to hear or notice other road users approaching if they are not in a direct line of sight—another problem for garbage truck drivers, as it is difficult to see to the sides or rear of the vehicle. Lastly, because garbage trucks frequently pull off to the side of the road, pull back on abruptly, and make U-turns and even drive on the opposite side of the street at times, their confusing and erratic patterns are impossible to predict, and this often leads to tragedy.

Winning a claim against a waste management company or city entity can be a difficult process, which is why you need an experienced personal injury attorney on your side. Call the Payer Law today at 866-930-1238 to schedule a free consultation with one of our Orlando personal injury lawyers today.