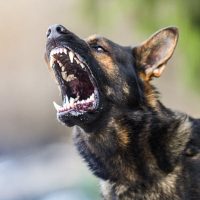 A recent lawsuit has been filed against two homeowners who hired a 22-year-old woman to house sit their dogs while they were on vacation. According to the suit, the dogs attacked the woman leaving her with permanent disfigurements. The dog sitter had gone to the house at about 5:30 pm to look in on the dogs. When she opened the door, she was immediately attacked by a German Shepherd and a pit bull.

By the time police arrived at the scene, they found the door off of its hinges and blood on the floor. The woman suffered injuries to her face and head. The dogs also attacked a neighbor who had responded to an alarm that went off when the owner’s door was left open.

Here’s the problem for the plaintiff. In most states, dog bites fall under a theory of strict liability. That means that if your dog bites someone, you are liable. In Texas, the rules are different. Texas operates under a one-bite rule. That means the dog generally has to have a history of violence before you can sue someone for a dog bite. However, certain breeds are excluded from this protection, and pit bulls are among them. German shepherds are as well. In this case, a neighbor who arrived at the scene told police that the dogs had not been aggressive before. But the owners had a sign on their porch that read, “Crazy dogs, please do not ring the doorbell. Call or text instead.” That would mean that the owners knew that the dogs had a history of aggressive behavior.

The damage to the woman’s face was extensive. According to reports, she lost both of her ears and has had to undergo numerous reconstructive surgeries to repair the damage to her face. She will be left deformed for the remainder of her life. Her nose and other parts of her face were torn off. The dogs have been euthanized as part of the resolution and the owners could not be reached for comment.

Damages in a case of physical deformity and mutilation tend to be severe. Medical expenses for multiple reconstructive surgeries will eclipse most people’s homeowners’ insurance policy limits quickly. That means that the family would be forced to pay any settlement out of their own assets minus the insurance policy payments. Even under Texas’ one-bite rule, the homeowners will not be able to defend themselves from these allegations unless they can prove that the girl provoked the dogs. That seems unlikely.

At the very least, the owners should have warned the dog sitter that their dogs could be aggressive. In this case, it could have prevented a terrible tragedy.

If you have been injured by a dangerous pet, call the Orlando personal injury lawyers at Payer Law today. We can ensure that your medical expenses and lost wages are paid for and get you compensation for your pain and suffering as well.