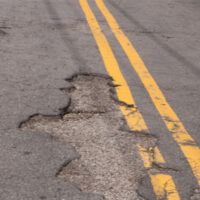 A driver loses control of their car when they go over a bad section of potholed road, crashing into a telephone pole. In another scenario, a driver gets T-boned when they go through a stop sign without stopping because the sign was obscured by a tree branch. A driver is rear-ended at high speed when they try to merge onto the freeway because the on-ramp is too short and at a dangerous angle. In all three of these scenarios, the driver may be able to argue that the crash was caused by poor road infrastructure or design, and sue the city or state government that was responsible for building and upkeep that section of road. With much of the road infrastructure in Florida on the brink of dilapidation, such as the Roosevelt Bridge in Stuart which is “at risk of an imminent collapse” according to the Coast Guard and CNN, it is not a stretch to imagine that your collision was caused by dangerous road conditions.

As such, bad road design causes 1,000 crashes per year, or just 0.045 percent of all annual crashes. View obstructions, poor signs or signals, and “other highway-related conditions” could also be included in the “poor road condition” category that would allow a victim to sue a municipality or state government, but combined all of these factors still do not even add up to one percent of traffic collisions. The fact is, it is difficult to win a personal injury claim against a city or state government because there are usually other factors that caused the collision. Maybe the road had potholes or a stop sign was obscured by a tree branch, but it could be argued that the driver should have reduced their speed as they approached the pothole, or that the driver should have slowed down approaching the intersection with the obscured stop sign in the sake of caution, as a reasonably careful driver would have done.

If you were injured in a collision that you suspect was caused by another party, including a municipality, it is in your interest to talk to an Orlando auto accident attorney. Call the Payer Law today at 866-930-1238 to schedule a free consultation.