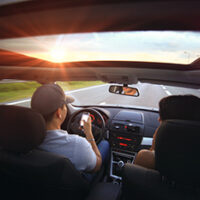 As people get desensitized to the dangers of driving, they often become reckless or negligent in behavior. Without even realizing, irresponsible drivers risk their lives and their passenger’s lives every time they drive recklessly. From checking your phone to speeding past the legal limits, reckless driving comes in multiple forms. By informing yourself on the different types of reckless driving, you can protect yourself from imminent dangers on the road.

Surpassing road speed limits is extremely dangerous for both yourself and all the cars on the road around you. For the past two decades, speeding has accounted for approximately ⅓ of motor vehicle related deaths. The influx of speeding related deaths can be attributed to the fact that spreading impairs the driver’s ability to react and stop in a timely manner.

Another common type of reckless driving behavior is tailgating. Tailgating is the act of trailing behind another car in an unnecessarily close manner. Drivers that participate in tailgating make themselves susceptible to rear-ending another vehicle because they don’t give themselves enough reaction time in case of sudden stops.

Weaving In and Out of Traffic

Weaving in and out of traffic is another form of reckless driving that increases the likelihood of possible collisions. This type of driving is dangerous because it is aggressive to other drivers and it leaves no reaction time for other people on the road in case of emergencies.

Often viewed as harmless or lighthearted fun, racing on public roads should not be taken lightly. Racing is an extremely dangerous activity that can lead to catastrophic injuries or results. Vehicles racing on public roads typically travel past the speed limits and disobey traffic laws, becoming a danger for bystanders, pedestrians, and other drivers.

Texting and driving is by far the most common form of reckless driving. According to The National Safety Council, there are about 1.6 million crashes per year caused by texting and driving. When drivers text and drive, their attention is diverted from the road, which increases the likelihood for a potential accident.

Impaired driving occurs when a driver is operating a vehicle under the influence of alcohol or drugs. Being under the influence alone can negatively affect a person’s coordination and judgement. As a result, intoxicated individuals are considered inept of driving a motor vehicle. Impaired driving is a serious offense, and just a single offense can lead to thousands of dollars in fines.

Searching For a Personal Injury Lawyer?

Reckless driving can be devastating for all parties involved as it often leads to catastrophic accidents and injuries. If you have been injured by a reckless driver, our Orlando car accident attorneys at Payer Law believe that you deserve sufficient compensation for your damages. With the help of a personal injury attorney, you can file a claim against the liable party. Experienced in numerous topics of personal injury, our skilled lawyers are prepared to fight aggressively on your behalf. If you are interested in scheduling a free consultation with a member of our team, please do not hesitate to contact us at 866-930-1238 today.