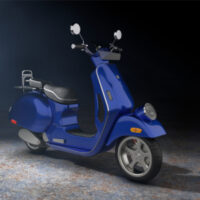 Mopeds, also called scooters or Vespas, are a smaller, less powerful version of a motorcycle, and offer riders a fun, economically and ecologically efficient method of transportation. Unfortunately, due to car driver distraction and aggression, riding a moped is much more dangerous than driving a car. Drivers often cut off moped riders, pass them illegally around double yellow lines, and pull out in front of moped riders because they, the driver, was not paying enough attention to the road. In these situations, the moped rider is often left with serious, life-threatening injuries.

According to Florida statute 320.01, a “moped” is defined as a vehicle with human-powered pedals, a seat, no more than three wheels, and has an engine with 50 cubic centimeters or less and a top speed of 30 miles per hours or less (as many mopeds these days have electric motors). What many people think of as motor scooters or mopeds is different from what the law says. Many of these vehicles look identical to a “moped,” but according to Florida law, a scooter with an engine larger than 50 cubic centimeters and/or can travel at speeds greater than 30 miles per hour is classified as a motorcycle.

Rules of the Road for Mopeds

Mopeds—scooters that cannot go above 30 miles per hour—must ride to the farthest right hand side of the road when they are going below the speed limit, except when making left turns or when it is not safe. Furthermore, riders cannot use mopeds on the sidewalk, bike lane, or on multi-use paths. Because mopeds are treated like cyclists, who also must ride to the farthest right hand side of the road, they are put in great danger by passing cars and other drivers due to the poor visibility that being in the shoulder of the road creates. In fact, a study found that most of Florida’s most “traffic infrastructure does not accommodate the safety of moped and scooter drivers.” And because cars are so much larger than a human body, when crashes do occur, moped riders are often left with extreme injuries, while the driver remains uninjured.

Were you hit by a driver while riding a moped? If you were injured, you need to talk to the experienced  Orlando personal injury lawyers at Payer Law, LLC today. Call us at 407-307-2979 for a free case evaluation.