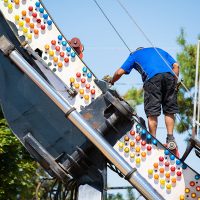 For millions of Americans, a trip to the state fair is something that marks the calendar each summer.  Amusement rides, petting zoos, and arcade games come rolling into town, providing entertainment for a massive number of people in a relatively short amount of time.  Perhaps it is because these rides and attractions feel so much like a piece of home that it is especially traumatizing when malfunctioning causes personal injury or worse to patrons.

A 2017 article by the online journalism site Thrillist investigated the safety of these amusement park rides and aimed to find out just how big of a personal injury risk these attractions can be.  While obtaining a definitive answer to that question can be difficult, the article pointed out some troubling realities about the nature of the traveling amusement park industry that accounts for a large number of the state and county fairs many Americans have come to love.

When an accident occurs on an amusement park ride and causes personal injury, victims are likely going to want to know their options for seeking compensation for damages incurred.  Typically, this work cannot be done alone, which is why many victims decide to elicit the services of an experienced local personal injury attorney.  These legal professionals can help victims review the circumstances leading to their accident and determine if another’s negligence was the root cause.

While consultation with a trusted personal injury attorney should always be the primary course of action, there are some general points of information regarding amusement park safety to which every Florida resident should be made aware.  Therefore, this article aims to provide some baseline information on amusement park safety for Florida residents.

The vast majority of state and county fair rides in America are part of companies such as Amusements of America, which travel throughout the United States assembling and disassembling the large amusement parks rides that have become staples of American fairgrounds.  Each time a ride is assembled and disassembled, there is a risk of human error that can result in ride malfunction and ultimately personal injury or worse.

A troubling example is the 2019 case of Tyler Jarrell, who was killed when a ride called the Fire Ball malfunctioned at the Ohio State Fair.  Multiple other people were injured.  The incident was determined to have been caused by significant corrosion of a support beam on the ride, leading to questions about the safety inspection and maintenance of these rides.

A major concern with amusement park ride safety, especially with travelling amusement parks, is the consistency of safety inspection from site to site.  Florida, for instance, has the state’s Department of Agriculture as the agency responsible for amusement park ride safety and inspection.  When these agencies fail in their duty to adequately inspect and order maintenance on rides that subsequently cause personal injury to patrons, it may be considered an act of negligence.

Florida is home to some of the best amusement parks in the nation, as well as the Florida State Fair.  When accidents happen and injuries result, victims need an experienced Orlando amusement park accident attorney to represent them as they seek compensation for damages. Contact Payer Law today to review your case and take the next steps towards resolution.