Can You Sue A Gun Manufacturer For A Misfire Injury In Florida? 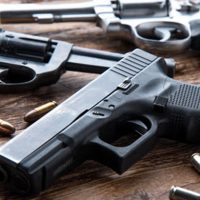 Everyone knows that guns are dangerous. But does that give gun manufacturers immunity from lawsuits in Florida? What happens if the gun is manufactured in a negligent manner, causing it to injure or kill people in an unintended manner? What if the gun was designed poorly, resulting in misfires, backfires, and other issues? Lawsuits against gun manufacturers have been the subject of fierce debate across the country, and it’s not always clear whether these manufacturers can be held liable for injuries. So can you sue a gun manufacturer in Florida?

If you’re serious about pursuing this matter further, you should get in touch with a qualified, experienced personal injury attorney in Florida as soon as possible. These legal professionals can carefully review your situation and recommend the best course of action based on your unique circumstances. If a lawsuit is in your best interests, your attorney can gather evidence for you, negotiate on your behalf, and represent you in court if necessary. Remember, it’s always a good idea to get in touch with a personal injury attorney as soon as possible after an injury.

Thanks to the Protection of Lawful Commerce in Arms Act, the gun industry enjoys a considerable degree of immunity from lawsuits. It’s worth noting that almost every other industry in the United States is subject to product liability lawsuits if products cause harm. This law was passed by Congress in 2005. Although many lawsuits have attempted to challenge this law, none have been successful as of this writing.

With all that said, it is still possible to sue a gun manufacturer in Florida (or at least attempt to do so). Back in June of 2021, a police officer in Tampa filed a lawsuit against popular gun manufacturer Sig Sauer for injuries sustained due to an alleged misfire. This individual stated that his P320 handgun fired by itself, without him pulling the trigger. Apparently, he merely brushed his hand against his service belt when the gun discharged, sending a hollow-point round into his leg. The round caused considerable concussive damage, shattering bones in his leg and ankle.

This is not the first time Sig Sauer has been sued for misfires, and many police officers are now using these weapons as part of department-issued “upgrades” for their previous firearms.

The dedicated Orlando personal injury lawyers at Payer Law can help you recover compensation for your injuries. Over the years, we have helped injured victims recover settlements from a wide range of accidents. We know how problematic these injuries can be, and we understand how important a settlement can be in this situation. You may have considerable medical bills that you need to pay, and your injuries may be preventing you from earning an income. Book your consultation today, and we can immediately get started on an action plan.